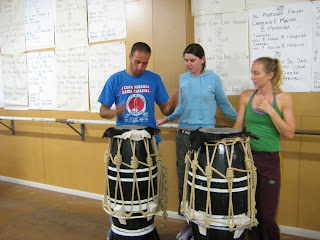 Lorem, our teacher, guru and fearless leader, Batatinha and Lua Branca on the atabaques. 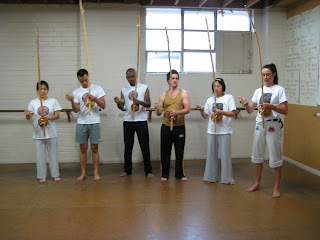 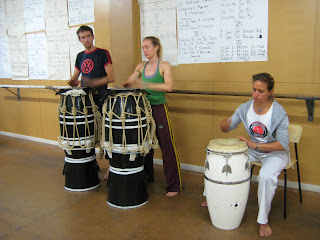 Another Wednesday class, full of uplifting music and singing, and people concentrating so hard that they make strange faces on the instruments. Some new songs, a tricky one that sounded a bit bogus, but there were a few that we nailed quite well.

Then acrobatics, I am always dreading it a bit as I have a few gaps in my acrobatic experience. Never know what to expect, if it's au (cartwheels) then I am OK, but we did some queda de rins exercises; meia lua de compasso into a kind of au queda de rins, flip the legs over one way, and then back the other way. Lots of grunting, falling to the floor with audible thumps, wrists giving way and red faces due to holding of the breath.

Must sound completely confusing, especially as (presumably)not all of you are fluent in Portuguese. At some point I landed extra heavily on the ball of my right foot, which has now resulted in a gnarly bruise all over the inside edge of that foot, tres attractive!

The roda was a real task, Lorem wanted me to play 20 times, to work hard, which meant I had to forget about playing the instruments or leading the singing. I think I ended up playing 10 times, must have played everyone there, Lorem mentioned that my ginga was missing so I played 2 games of straight up ginga, which was quite relaxing and peaceful. A valuable lesson learned.

So many facets to this capoeira, and its hard to work on one when they are all so important. Right now I think my stamina needs a boost, I feel I am lugging around a few extra kilos. I'm blaming it on the recent birthday which involved a lot of cake!
Posted by Unknown at 6:41 PM

Email ThisBlogThis!Share to TwitterShare to FacebookShare to Pinterest
Labels: capoeira