So Leo had the day off kinder recently, and we decided to saunter over to Scienceworks to see what was going on over there in Spotswood. Well we nearly peed our pants when we got there to discover that the Star Wars exhibition had opened!! Woohoo!! 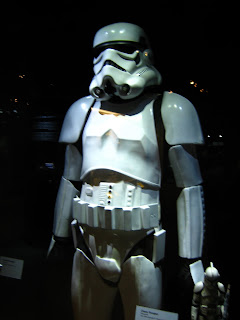 Titled 'Where Science Meets Imagination', this exhibition showcases more than 80 costumes, models and props from all six Star Wars films. I was taken back to my primary school-aged self just by looking at the Stormtrooper outfit and feeling a little bit scared. Let me tell you, some of these actors must have been huge, I know that Chewbacca / Peter Mayhew was way over 6 ft, also Darth Vader / David Prowse was too. (Does anyone want to play SW Trivial Pursuit with me? Anyone?) 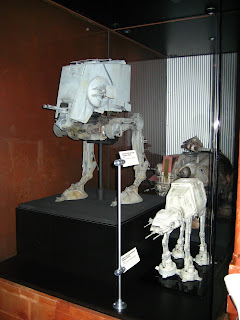 There are various sized models, ranging from small maquettes, to this huge AT ST, and there was a ginormous Millenium Falcon which Leo announced was 'the thing I really wanted at the toy shop'. 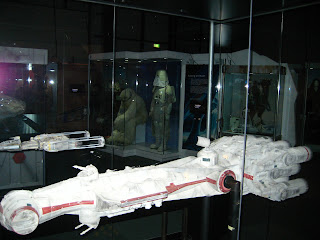 Check out the Wampa and the Snowtrooper in the background! 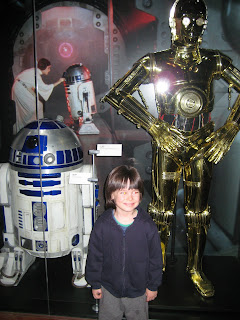 Leo adores R2D2 and C3PO, so he was happy to pose for this photo. There was also a small theatre room with a presentation about robots, with an animated C3PO and other robots used in motor assembly, sewer inspection and bomb disposal. Leo was waving to the C3PO saying 'hello 3PO, I'm over here, hello!'

Other experiments included programming your own R2D2, and also building R2 units with different wheels for varying terrain. There are environmental displays showing what people wear in cold/hot/wet/dry climates, and a great model of a Wookie tree village. Hmmm what else can I recall? A complete collection of all the lightsabers used, loads of amazing original costumes, although not so many from Episodes I, II and III. I really wanted to see some of Queen Amidala's outfits, but my thirst was slaked somewhat in the Star Wars shop (of course) with the purchase of a book detailing all the costuming by Trisha Biggar. 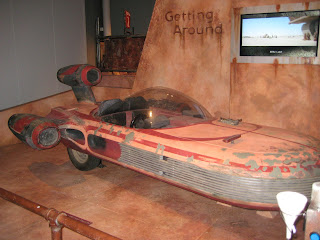 The ACTUAL landspeeder from Tatooine. This led onto an large experiment in Mag Lev technology, using Lego and magnets to create hovering vehicles. Kid with short attention span not so interested, despite the Lego. Parent disappointed running off to chase excited child as he spies the Medic droid from Episode V.......

Leo just wanted to rush though and look at all the droids, which was rather frustrating, so I guess we will be making many more visits. It's on until November folks.

Listening to: Daft Punk - Harder Better Faster Stronger
Posted by Unknown at 10:01 AM

That is pants-peeingly awesome. Leo must be SO SO SO inspired and excited now! Not that he wasn't already....

I have this idea that Leo will be dropped at kinder and Emma will become a familiar face at the Star Wars exhibition until her thirst is slaked
heehee
Leo's the little apple that hasn't fallen far from the tree!

I saw this exhibition at the power house many moons ago. It was so geeky and wonderful!I was nostalgic for those saturday afternoons spent with my friend DS - we would sketch the Millenium Falcon and watch his beta tape copy of Starwars in our tracksuits and dunlop volleys eating bags of salt and vinegar chips and icecream out of the tub. we were so lame!
Ramona

Hi, this is Genevieve Fahey the Manager of Scienceworks. Thankyou for your lovely rap of our exhibition and glad to hear that you and Leo enjoyed the show. Just to let you know that this is not the same exhibition that was at the Powerhouse many moons ago but a whole new one with different stuff and interactives.