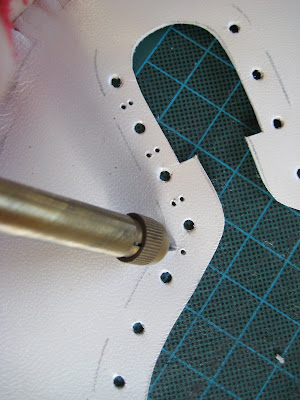 Brogueing by hand. I have used machines to do this, but they are absolute beasts - fast, furious, hungry and sounding like a machine gun. As long as I'm doing a pair at a time I think I'll do it by hand! 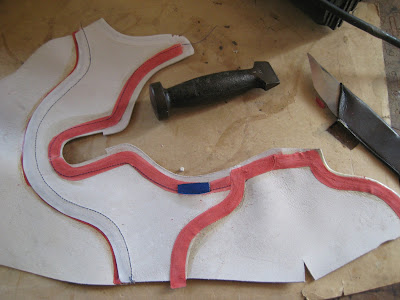 Red underlays for the holes. Each piece has to be shaved to be paper thin, so as not to add bulk. Again you can do that by machine, but my knife and I have such an affinity, we are a good team. 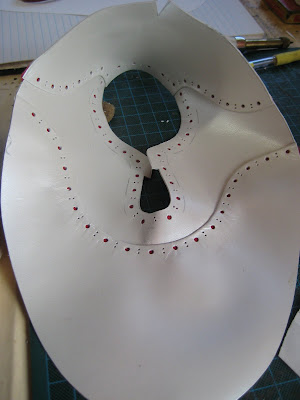 Upper assembled and ready for stitching. I was agonising over white or navy stitching - white would be less obvious and therefore could hide possible mistakes, navy would be gorgeous but would show any mistakes immediately.
I decided on navy, and crossed my fingers that my machine would behave. As fate would have it, right when I was being filmed at the sewing machine, the tension went all crazy and pulled up giant loops from the bobbin thread. So much for crossing my fingers.... 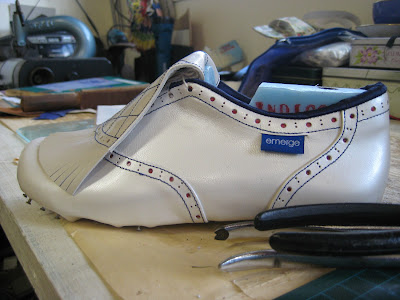 Trial lasting for Bandit Films, who came to the studio last week. I love the look of these, the idea began with the padded, fringed flap over the laces, a la golf shoes. From there I designed the rest like a traditional oxford, decided on sewing the lining like a sneaker, with a rolled top edge and ankle padding.

It was freezing on the morning that Tom and Dan were filming, I was so worried that my fingers wouldn't work, indeed they were rather stiff and I whacked my fingernail while hammering, so professional.

So I will be lasting these properly at DMT this week, I'll be there 11 - 4 Thursday to Sunday, tinkering and enjoying my time with all the other makers and creative folk. Come and visit, ask questions, hang out with us, I'll be sharing a space with Maryanne Talia Pau.
Posted by Unknown at 11:16 AM

They look fantastic Emma! Can't wait to see them in the flesh...