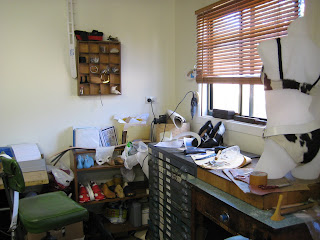 This is my studio, in various states of chaos. It smells of leather, metal, sawdust, sunshine, and at various times it reeks of hefty contact adhesive.
I am planning to get a lot more shelves on the walls, to alleviate the floor clutter, but I'm starting to realise (after 10 ish years of being a shoemaker) that clutter is how it is. My beau is a minimalist, and I share this studio with his motorbikes and X Box, so he often gives disapproving glances over to my end of the room. 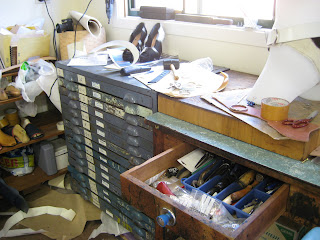 I seem to have no bench space to work on, my shelving plan also includes more benches, but even if I had endless table space, I'm sure my hand tools and patterns and bits/pieces would be strewn all over the place. I'm always packing up in the middle of a job, just so I can clear things away. 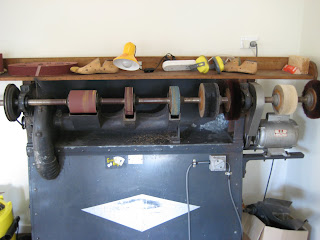 This beast is my beloved Esto, a machine from the 50's or 60's. I bought it via the wall of ads at the old Leffler's, from an old Italian shoemaker who had it gathering dust in his workshop. It has a fair capacity for producing a lot of dust, so we have fitted a roaring vacuum unit onto it, but the precious motorbikes still need to be covered. I always wear my safety goggs and earmuffs when using this machine, I can get into quite a zone, sanding away, oblivious to everything else. 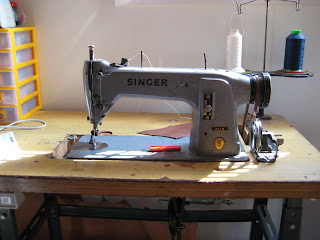 I have had this machine the longest, about 12 years, it has travelled from Adelaide to Sydney, and then to Melbs with me. I bought it from a guy who said his father used to use it, it's rather ancient and was originally on a treadle base. I learnt to sew on my Grandma's old Husqvarna treadle, which my mum had at our house, so treadles weren't foreign to me. However, sewing shoe uppers is a very fiddly business, and I found that I was rocking and rolling in my chair and not able to sew neatly, so I swapped the base for an electric one with a teacher of mine. It has a wheel not a foot, this makes it a leather machine, and the classic chisel tip needle. I can sew heavy fabrics on it, but it does have a tendency to chew, and so I get out the old domestic on those occasions. 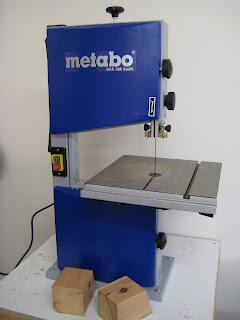 My most recent acquisition. This machine does in 2 mins what I used to do with my knife, with lots of sweating and swearing, in 20 mins. Soling leather is so hard to cut by hand, and really not cost effective, so the bandsaw has already paid for itself. The heels for the Marcella cowhide shoe would have been impossible without this machine.

I am rather obsessed with looking at other people's studios, how they store everything, what things are close to hand, is it pristine or chaos, is there colour and life , what are they making? I wonder what my studio says about me. It certainly isn't pretty.......... 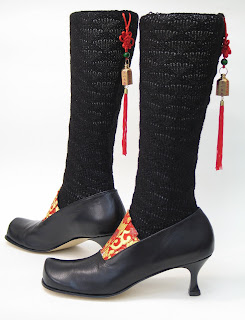 ........but pretty things are produced there. These are called 'Chinoiserie' and were made in 2006 for the now defunct Flinders Quarter Award. I used some cherished brocade fabric from Kazari for the fan detail on the shoes, and my newly acquired knitting machine skills for the socks. They were also shown in the TAG show last year at the Embroiderers Guild.

Phew what a ramble! Hope you are not bored to tears. I did have a direction for this blog but seem to have veered off course. Think I will have a cup of tea and compose my thoughts for the next installment.
Posted by Unknown at 2:07 PM

Email ThisBlogThis!Share to TwitterShare to FacebookShare to Pinterest
Labels: footwear, On My Desk

No, definitely not bored to tears! A friend sent me a link to your blog, because she knew I'd be excited to read a blog by a shoe maker- something I have attempted and wish I had time to explore further (one day..). I'm ejoying cliking back though your archives, reading about shoe making, and seeing such beautiful shoes. These are gorgous- I love the toe shape, and the combination of textures and materials. Stunning!