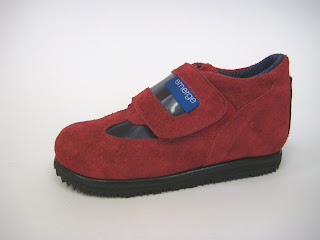 I made these for my boy, they were started a while ago and now that they are finally done, his feet are too big! I love tiny sneakers, although the pattern pieces are so fiddly and easy to lose, stitching the uppers is an exercise in creative wrestling and swearing.

Generally it's quite nice to use small amounts of materials, and glue, the red suede uppers were salvaged from my scraps bag. It is a shame that he can't wear them though, as they say, the proof of the pudding is in the eating, and if I was a three year old, these would be tasty indeed.

A question for those of you with kids, do you dress them like they were smaller versions of you? I sometimes notice that Leo and I are wearing the exact same colours, and in order to avoid that I dress him in earthy colours like brown and green, as I have a real aversion to all things brown.

My colour scheme is more like Napoleon's army, a lot of red, white and blue. Never ever ever black, it makes me feel invisible, same for brown, I feel like a drab bird. I love that others can wear these colours, they're just not me.

I could ramble on about colour for weeks, tone on tone, pastels vs brights, and can pale skinned people wear yellow? Let me know your preference.
Posted by Unknown at 6:09 PM

Email ThisBlogThis!Share to TwitterShare to FacebookShare to Pinterest
Labels: footwear

Ahh! So cute! Such a pity they don't fit, but I can't help wondering if they need a new home...?
On the colour front, I think I must be the opposite- I live in black, browns and greys, with splashes of green and red and purple. I have been known to discover that I'm dressed the same as my (15 month old) son, but only a grey t-shirt with denim combo (he wears alot more colour than I do).