She was a big freak!

No, not the black and white film star with the famous eyes.
The other Betty Davis, once married to Miles, who can be credited for introducing him to Jimi Hendrix and Sly Stone, and for widening his musical tastes and inspiring the Bitches Brew album. 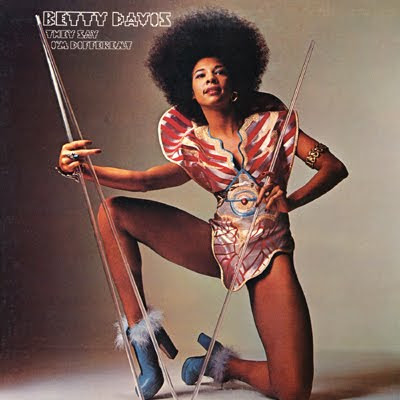 Betty Davis who was out there, flying her freak flag high, who couldn't be tamed, who had amazing live shows, who was boycotted and banned from being played on many radio stations due to her liberated sexual attitude, who has influenced many a musician from Prince, to Peaches and then some. 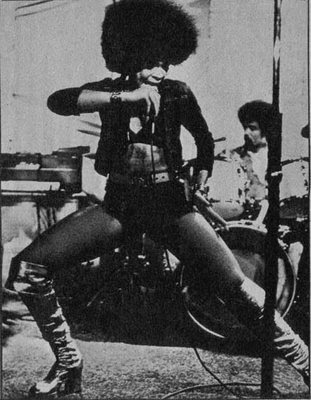 I guess I became aware of her music when I started listening to hip hop, and was trying to figure out where all the samples came from. As my interest in funk music grew, I found Betty, and boy is she a keeper! I love her, the sci-fi meets mythology costumes, those legs(!), the raw earthy vocal style, the amazing musicians - she has the rhythm section from Sly and the Family Stone on her first album and the Pointer Sisters on backing vocals. Sheez!


She only released three albums, in 1973, 1974 and 1975, none of them were commercially successful, though they are widely collected as cult classics, and then she was gone, living quietly as Betty Mabry to this day, refusing interviews.

you just love her shoes!!

I love her too. It's amazing how she has come back into favour with the cool kids. What about Terry Callier? He is super cool too. He's less break out and more make out, though. xx

Oh man! I love Betty Davis. I discovered her about ten years ago. Her voice is so raw and awesome. I gotta go bust out some records now. Thanks for reminding me!