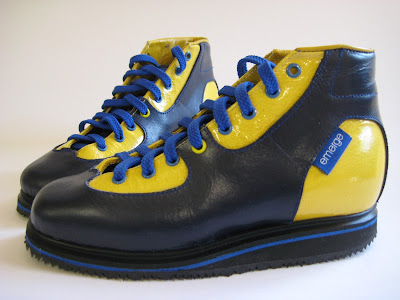 Finally finished Leo's boots on the weekend, a triumph for me, followed by a quick deflation, after he announced that he wouldn't wear them. Apparently they are 'winching up' his ankles, which I take to meant that they are uncomfortable.

I remember getting new shoes as a kid, some that I really hated, they were so stiff and there was no way I wanted to put them on, but the parents made it abundantly clear that they were to be worn.

I don't feel that I can be an ogre about this pair, even though I'm taking it a tad personally, maybe I'll suggest that he wear them for 10 mins per day, and see if the 'winching up' issue subsides.

No doubt they are a bit more challenging than the elastic sided boots he's been wearing all winter, these require lace savvy fingers, but there's no time like the present to learn how to tie laces. That's another lesson I recall learning about the age of 6, I remember procrastinating about tying my shoes, Mum getting exasperated and saying 'for God's sake Emma, I've shown you how, just bloody tie them!'. Bloody was a big swear word at our place, so I knew she was serious.

Meanwhile the small girl screams in protest at being put to bed, I'm amazed how babies resist sleep so defiantly, even when it's darn obvious that they're completely exhausted. Another lesson to be learned!
Posted by Unknown at 12:06 PM