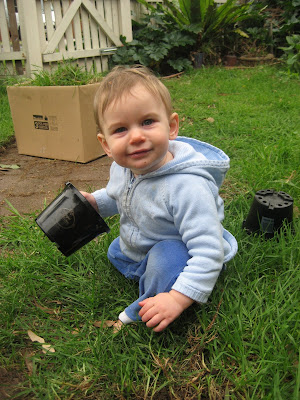 It is Autumn, so we are gardening.

Things have become a little overgrown in our patch, and our current project is to rediscover the front path.

Every morning when we get home from school drop off, Hazel and I spend half an hour or so out the front, me snipping the weeds with secateurs, while Hazel gets about exploring with a lot of chatting. 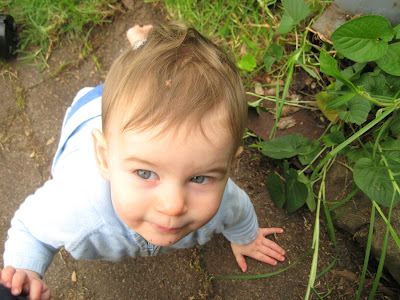 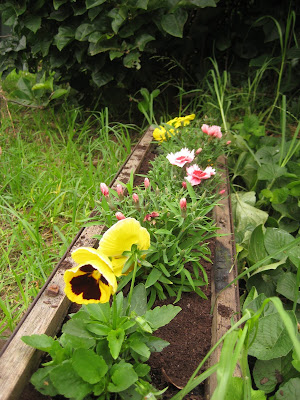 I have been working a lot lately, and struggling with the attempt to balance that with family biznezz. There have been many tantrums thrown by me, and many blocks of chocolate consumed. I know that 70% cocoa is good for you, but really 45% tastes so much better!

Small girl has been a shocking sleeper, so we have had to move Leo out of their shared room, and he's been in my bed. The other night I didn't really sleep much before 4am, she was up and down so much. I wouldn't have minded such a late night if I'd been out at a fabulous gig, but walking around the dark house in my PJs was much less fun.

To be honest I don't mind having Leo in my bed, when I sneak in he is like a little hot water bottle, and it's good for this Mama to spend some time just with him, especially now that he is so much more independent as a big school boy. 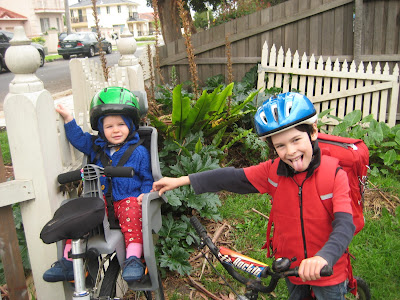 One bonus for us in recent weeks has been the riding to school. I used to be a bike messenger back in the day, and when I had kids I realised that I was in the car so much more than I wanted to be. Leo finally taught himself to ride a week before school started, and as his school is so local, every morning and afternoon we are in a convoy on the bikes. We love it!

Little reminders of my former life are creeping back in, I have a puncture repair kit in my bag again, Leo is getting used to locking his own bike, and Hazel no longer tries to rip the helmet off. I am much more ladylike now that when I used to ride everywhere, and I can report that I have successfully worn wedges whilst riding! Woot!

And while this all seems very middle class and suburban, I am always thinking of the Japanese people and their triple tragedy. I will never forget watching the NHK live helicopter footage of the sea taking over the land, seeing people desperately riding their bicycles away from the water, while realising that I was watching the last moments of someone's life.

I must say that I don't feel very useful in circumstances like these, I think that in another life I would be a Red Cross Emergency worker. I often wonder how shoe making and now media monitoring are very useful. I remember about 11 years ago I got in touch with Australian Volunteers, and when they asked what my skills were and I told them shoe making, they almost laughed and said 'We don't think that there's much of a need for shoe making in our posting locations'.

As a mother of small children I obviously can't go gallivanting around the world helping people in disaster zones, but I do want to do SOMETHING. Might have to put that on the list. Meanwhile I helped Ebony out with her fundraiser for the Japanese Red Cross.

I understand!
It was my intention to go into aid work o/s and then I made other choices along the way.
They don't have much need for an ex makeup artist with a craft design degree either and 3 kids either :(

I need to figure out another plan of what I can do, or follow this up again later in life.