Well I said it would be a big week, which was true indeed, it was exhausting, a bit emotional and I definitely feel very much like I am a member of a great family.
During the week we started each class with music, lots of Ginga Mundo students keeping us company and celebrating Melbourne capoeira with us. On Wednesday we had a workshop with Professor Vira Lata from Ginga Mundo, a lot of students crammed into the studio, but the Brazilians always remind us that "in my country you have to fight for your space every class".

Friday was amazing in that Australians were doing capoeira on Friday night, not at the pub! And our Muzenza pants arrived just in time, fresh whites are always so good. Mestre Cicatriz from Sydney's Associacao Sinha Bahia de Capoeira gave a regional workshop focusing on armada, check out his kick below. He is so softly spoken and shy, has been playing for 26 years, has got awesome control and precision, and is so humble, it was so good for him to share his skills with us. (Check out Animacao giving thumbs up in this photo!) 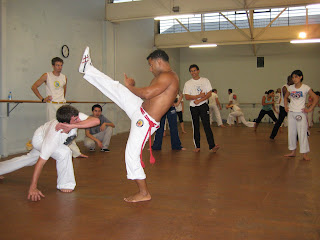 Everyone hard at work. 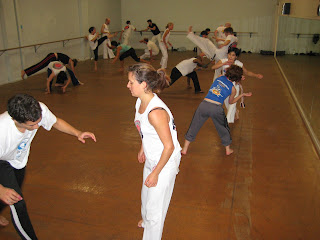 Saturday our Batizado was held in Brunswick at the Playspace, for me it was so good to ride my bike for less then 10 mins to get there, I am a Northsider for sure! The studio was beautiful and has such a great floor, a strict no shoes policy which meant we had clean hands for a change!

Contra-Mestre Borracha from Sydney's Capoeira Acre led the warmup, which included a wheelbarrow walk in pairs across the room, a great way to break the ice. Then we were introduced to Mestre Goioere from Muzenza in Perth, who had flown all night to be with us. He is 2 or 3 times World Capoeira Champ, and is also a black belt in Brazilian Jiu Jitsu. His workshop had simple elements but was complex in arrangement, different ways of putting it all together which had us all guessing. Beleza!

We then worked in pairs practicing takedowns, namely vingativa, tesoura and how to escape. Thanks to Simon from Canberra who repeatedly landed on his ass in the demonstrations.
Here is Boomi and Mestre Goioere. 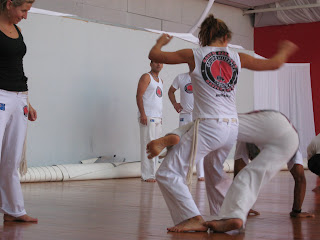 Everyone got their new t-shirts and had a rest, it looks like we are on Capoeira Camp in this photo! 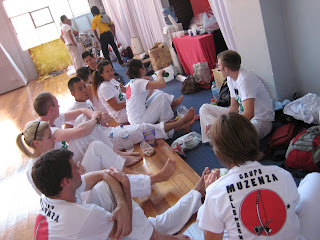 I didn't take any photos of the presentations, there will be ample footage getting around soon. It was quite emotional watching everyone receive their belts, finally finding out how we all did in the written test, and then playing all the Mestres, including Gingaginha the Angoleiro. Mostly they put us on our collective ass for the afternoon, pants not so white now!

We were there for about 6 hours in total, hands completely red from so much clapping, pandeiro playing and fierce berimbau action. Boomi and I received yellow/orange cords, which was one better than I thought I was getting, I'm glad I shared it with her, bless you Boomi! Also especially glad that Canela is finally officially down with our posse, that Valerio/Duende came to play (good to see you Val) and what a revelation to see Marco in white with his shoes off. I actually prefer him in his street clothes, which show his personality more than whites.

Yay Arroz getting his 5th belt, and a super surprise for Pantera, my capoeira buddy from way back, getting her 6th belt, truly well deserved for the 2 (or 3) of them! Pantera sang some great songs including Chama Yo Yo, and after the rhythm got into a frantic Sao Bento Grande pace it was capped off with some Samba de Roda, Garoa and Canela showing us how to shake that booty! 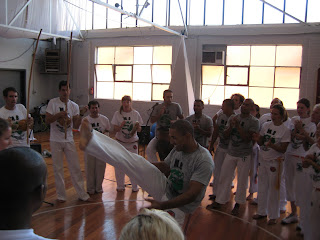 I was quite moved to recognise that it wasn't just us students cementing our appreciation and love of capoeira, but it was our whole school, and particularly Lorem. He is such a dynamic young man, (when I found out what year he was born in I burst out laughing, he really is young), he has really inspired us, and we all feel very strongly about wanting to train with him and be part of his Melbourne family.
It was amazing to see all the Mestres, Contra Mestres and Professors supporting him and celebrating his achievements in starting and sustaining our school, may this be the first of many Melbourne Batizados, Viva Lorem! 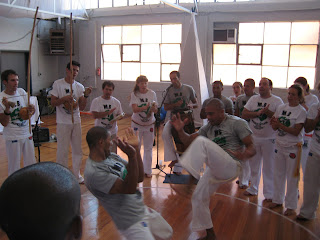 Sunday the Brazilians were late to Elwood Park, my boy Leo and I didn't mind, we were at the playground till everyone arrived. We couldn't stay long, but managed to see a creative capoeira hack game, check out Fominha in action. Mestres Goioere and Cicatriz provided gorgeous rhythms on the atabaques, we were musing that all parks should have drums installed. 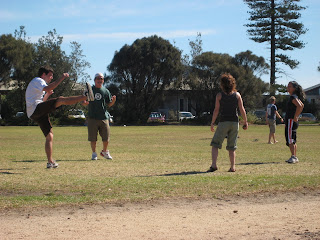 It was a great way to finish off the week, the end of summer, and a new posse of Muzenza capoeiristas. 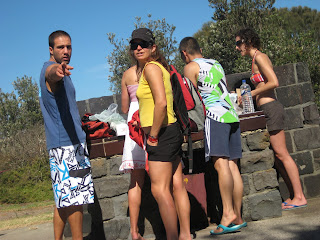 Email ThisBlogThis!Share to TwitterShare to FacebookShare to Pinterest
Labels: capoeira

Thanks for posting, I really enjoyed your most recent post. I think you should post more often, you obviously have natural ability for blogging!

OMG! I love it which is so awesome. Thanks for sharing.