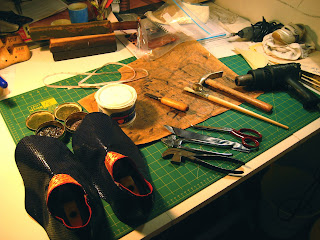 Well I have crossed a few things off the list today, but it took me so much longer than normal. I lasted these uppers, it usually takes an hour, but with all my visitors, and amazing conversations it took me about three times as long.

Plus I kept going out on the fire escape to use my stinky glue, and then the door closed and I was stuck outside, so I had to go down all the stairs and around the block and come back in the front door, I'm sure Kim and Rose in front of house wondered if I was an escape artist!

Thanks Pene for the delivery of Haigh's treats, and to Nella for all her laughing, such a great sound, I have been cracking jokes just to hear her laugh. 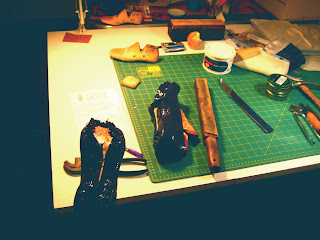 The gallery has serious mood lighting, hence the darkness of my photos. 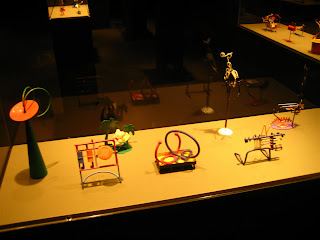 Speaking of lighting, get thee to the Klippel show at the NGV, a visitor who dropped by yesterday urged me to go, and it's amazing. The first room, above, is very dark, with what appears to be hundreds of tiny colourful maquettes made of found objects, bits of detritus and metal scraps, all housed in subtly lit cases. Mr Klippel's son, who is a composer, has produced an accompanying score, which makes some of the maquettes vibrate ever so slightly. My Leo would love to get his hands on them, he would probably pull them apart and re-figure them in his Lego-esqe way. 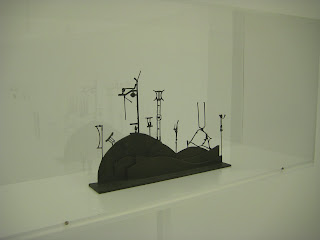 The second room is hardcore, and you need to prepare your eyes before you enter. The entire ceiling is one huge light, and the whole space is the brightest white you will ever see. Similarly there are a lot of cases housing maquettes, but these are all bronze, and so the shapes become much more obvious as they are silhouetted against the starkness of the room. There is a combination of really delicate with blunt, as the above photo shows.

It really is a clever exercise in contrast, completely opposite moods to display works which are quite similar. And it's free, and you can take photos.

To cap my busy day off, I went to a Salon discussion at the CAE City Library, about Craft and Design, where a few different makers and curators were talking about the 'intersections and connections between design and craft practices'.

Phew, it's been a barmy week and there is still more to go, tomorrow I'll be working away till three and then jetting over to the museum for the tail end of another Craft and Design as a Career seminar. These are always worth attending, and tend to sell out, so put it in your calendar for next August.

And there is a mini capoeira festival this weekend, with workshops from two different styles of capoeira. I am worn out already but will be learning some Capoeira Angola moves on Saturday afternoon. Then I'll probably collapse in theatrics.
Posted by Unknown at 9:05 PM