What an exhausting day, we braved the show with 5 adults and 6 kids, we all managed to see everything on the list, and no-one was left behind. The kids were unstoppable wriggly/running- away/belligerent forces to be reckoned with, they outpaced us adults energy-wise, we were all gasping for a cup of tea and a lie down. Actually that's one thing which was on my list, scones and tea at the CWA, didn't make it there for some reason. 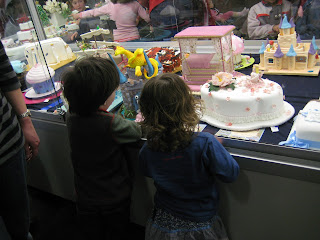 These two were enthralled by the cake decorating display, they made their way around the whole exhibit with noses pressed to the glass. I hope that Leo isn't expecting such grandeur for his birthday! 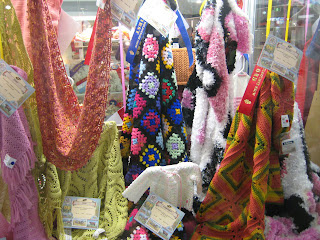 I had to take a few quick photos of the crochet and embroidery, everyone was leaving to head over to the livestock pavilion. Met Pip briefly for a scarf exchange rendezvous, and we considered entering something in the Arts and Crafts for next year. How does one go about this? 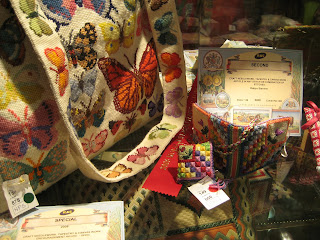 I loved this canvas work, and actually saw a few fine examples of bargello and cross stitch that were entered by guys. Woohoo!

Leo is now demonstrating the woodchop on anything in his path, and proudly wearing his Wall-E robot backpack/showbag, as I've said, it's all about the robots at our place. So now I'm packing my bags for another Adelaide visit, knowing that it is set to reach 29 degrees while we are away, but now it is raining and my last thought is for a sunhat.

Listening to : Scott Tinkler and Paul Grabowsky - Reason and Rhyme
Posted by Unknown at 6:10 PM

so glad someone got to the show, and saw the woodchop no less!!!
excellent work Emma, i'm as jealous as all get out, and very pleased you managed to get a couple of crafty shots in for those of us tied to small people at home for the moment.
xb

I have such fond memories of visiting the craft halls at shows with my grandmother, unfortunately it is so long ago that I have indulged!

Did you see the new category of crochet from recycled materials?
We go there too..but after Jack hit his head when on the dodgen cars and vomitted twice it all got a bit much. didn;t get to CWA either...maybe next year!