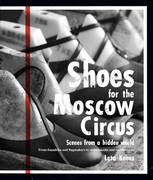 Scuse the tiny photo, but in real life this book is a chunky hardback bible of goodness. Here's the blurb:

'Shoes for the Moscow Circus is an atmospheric, lyrical look behind the scenes of a number of Australian trades and industries, many of which are fast disappearing in the modern world.

Arts writer Leta Keens, with photographer Oliver Strewe, visited more than 25 factories and workshops -- including an umbrella maker and cricket ball factory, a taxidermist and a bicycle maker, a tannery and a dolls' hospital -- and discovered far more than simply the history and processes involved in these trades. With an engagingly readable style, she also tells the stories of the characters who inhabit these intriguing and often little known worlds.'

I've been slowly making my way through this Mother's Day pressie as I feed Hazel, in fact I am getting a lot of reading done during this time, it's rather lovely. If you're interested in traditional crafts and professions, get this book, it is a divine look at some amazing trades, some of which are on their way out, and some who have luckily found their niche.

Email ThisBlogThis!Share to TwitterShare to FacebookShare to Pinterest
Labels: creative allstars, favourites, On my bedside table

Sounds like a great book!
How's life in the baby haze?
I hope you & your family are well & happy.
Have a lovely week.